In case you missed my tweet this morning: The mystery behind Claudine Barretto’s missing bank deposit (P5M) has been solved. It was allegedly withdrawn by government peace panel chair Marvic Leonen and donated to the Moro Islamic Liberation Front!

Gaddafi
Less than a week after his body was stored in a freezer, Libyan dictator Moammar Gadhafi was buried. Take that Ferdinand Marcos!

Colonel Moammar Gadhafi has been buried. But die-hard supporters couldn’t find his grave. Filipinos have a term for that: “Undas.” 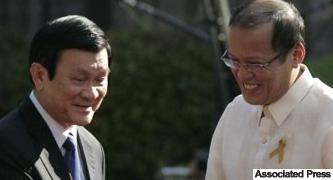 State Visit
Vietnamese President Truong Tan Sang had a bilateral meeting with President Aquino in Malacañang Wednesday afternoon. Tan Sang is in the country for a three-day state visit. Now that explains why palace-based presidential speechwriter Mai Mislang is on a three-day leave of absence.

The President of Vietnam is in the country. Last night, he tweeted that the wine served by President Aquino didn’t suck and that “marami palang pogi dito.”

Clinton in Manila
US Secretary of State Hilary Rodham-Clinton will meet with President Aquino in Manila on November 15. This early, the President is being warned. Hillary hates cigars.

According to the UN Population Fund, China has the biggest population at 1.3 billion, followed by India at 1.24 billion. In third place is Ramon Revilla Sr’s household.

Alcohol Poisoning
A British coroner ruled that Amy Winehouse drank herself to death. And Executive Secretary Paquito Ochoa was like, “Don’t worry. I know my limits.”

Anti- ‘Anti-Smoking Ban”
A Mandaluyong RTC judge has issued an injunction against the MMDA’s anti-smoking campaign. Critics say it was a victory for tobacco companies. Or as the judge would call it, “bonus!”

Sentenced
For illegally disbursing 21 million pesos in government funds, former ARMM Governor Zacaria Candao has been sentenced to 153 years in prison. If it’s any consolation, Candao will be locked up in a prison cell with a convict identified as Michael Scofield.

Quotes of the Week
“I think ‘all-out justice’ are just words. The President is trying not the use ‘all-out war’ because it will definitely cause some furor among different sectors. But what does all-out justice really mean?”
~Sen. Francis Joseph Escudero

How big was the world when you were born? Find out here. This is fun and informative.