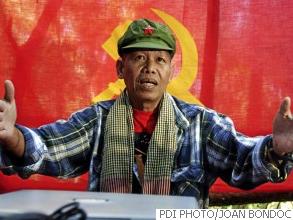 Gregorio ‘Ka Roger’ Rosal, spokesman of the Communist Party of the Philippines’ armed wing, the New People’s Army is dead. I heard Malacañang is now willing to talk peace with him.

The Communist Party of the Philippines has confirmed that its spokesman, Gregorio “Ka Roger” Rosal is dead. On the brighter side, the CPP-NPA is announcing a job opening soon!

Rumors have it when Ka Roger got sick, he stepped down as spokesman and was replaced by his No. 2 guy who’s gay.

Communist spokesman Ka Roger Rosal died last June 22. It took the CPP-NPA more than three months to confirm his death because of Globe’s poor signal in the Sierra Madre Mountains.

In lieu of flowers, the CPP-NPA is now accepting revolutionary donations.

Smokin’ President
Presidential spokesperson Edwin Lacierda denied that President Aquino was allowed to smoke in his recent return flight from San Francisco to Manila as reported by a Manila Standard Today columnist. Lacierda is offering an Hermes bag as reward to anyone on that flight who could show proof that the President lit a cigar.

Envoy Apologizes
US Ambassador Harry Thomas Jr. apologized for saying that 40 percent of male tourists visit the Philippines for sex. The US envoy admitted he didn’t have the statistics to back up his claim. Only the experience.

But Sen. Loren Legarda still wants Ambassador Thomas to “provide the basis of the 40 percent” – prompting the envoy to panic and seek the help of 4 of his 10 closest American friends in Manila.

Quotes of the Weak
“Very clearly, the moves to persecute the Arroyos are Palace orchestration with Lacierda as the principal crooner singing whatever tunes Aquino would want to hear.”
~Arroyo lawyer Raul Lambino

“(Lambino) just sang out of tune. He wasn’t listening to the melody and lyrics of my statement. So get a music teacher.”
~Presidential Spokesperson Edwin Lacierda

Personal
Last Saturday’s edition of #QUIZtion: a general knowledge quiz on Twitter, which I moderate was one of the most competitive in recent weeks. One word: kinarir. 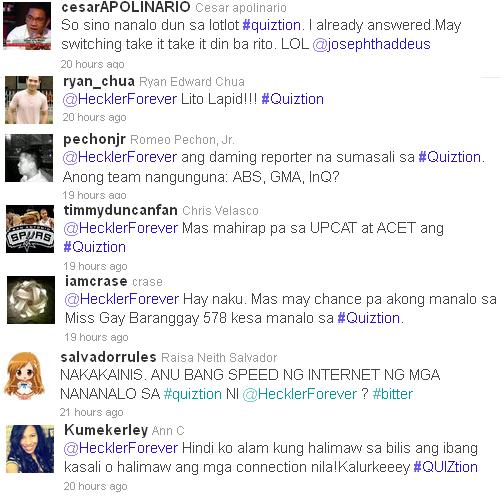 Join #QUIZtion every Saturday night between 8:43 and 11 o’clock. Good luck!

Have a safe, healthy, and productive week!