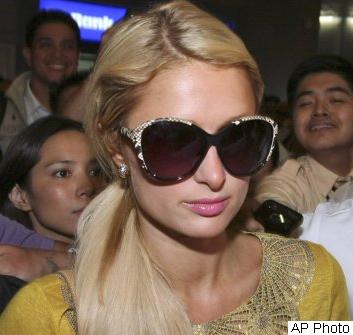 Internet reports say Paris Hilton will meet with President Aquino. The heiress and the hairless.

Unconfirmed reports say socialite and hotel heiress Paris Hilton will meet with President Aquino. Paris is planning to advise the President to try the Simple Life.

Malacañang has denied rumors that President Aquino will meet with the famous socialite. He’d rather spend time with his Marlboro lights.

Presidential spokesperson Edwin Lacierda clarified that contrary to initial reports, the President will not meet with Paris Hilton… much to the delight of model Georgina Wilson.

GMA’s Condition
Lawyer Raul Lambino was quoted to have said that doctors have advised former President Arroyo to seek medical treatment abroad. Or as critics would call it, asylum.

Substate
The Moro Islamic Liberation Front has proposed the creation of a Muslim “substate” within the republic. Some analysts believe it is actually feasible. If a “substate” worked for Makati City, it could also work for Mindanao.

Migz and Quiboloy
Davao-based Pastor Apollo Quiboloy of the Kingdom of Jesus Christ the Name Above Every Name has endorsed the appointment of former senator Juan Miguel Zubiri as Tourism secretary. There! He just doomed Zubiri’s chances.

Pastor Apollo Quiboloy praised Migz Zubiri for his “vision” and “charisma” making him a potential successor… to Quiboloy himself.

Quote of the Weak
“I had more panties than shoes. It’s true. I wore black panties. They displayed it and it was good all my panties were black. I had thousands of it.”
– Former First Lady Imelda Marcos

PDI: I found a tooth in my ice cream