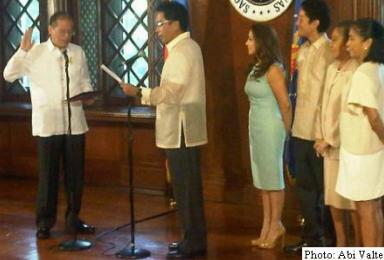 New DOTC Chief
Defeated vice presidential candidate Mar Roxas took his oath as DOTC secretary before President Aquino today, July 4. Of course, Korina Sanchez was also present in Malacañang. She was beside her husband and in front of her ex-future husband.

No. 5: “I, Manuel Araneta Roxas II / do solemnly swear / that I shall remain loyal / to your ex-girlfriend now, my wife… ”

No. 4: “I, Manuel Araneta Roxas II / do solemnly swear / that I shall wait for my turn / to be appointed within the year / as Executive Secretary… ”

And the no. 1 inadvertently inserted but omitted portions of Mar Roxas’ oath of office as administered by President Aquino…

“I, Manuel Araneta Roxas II / do solemnly swear / that I will faithfully and conscientiously fulfill my duties / as DOTC secretary slash acting President of the Philippines…” 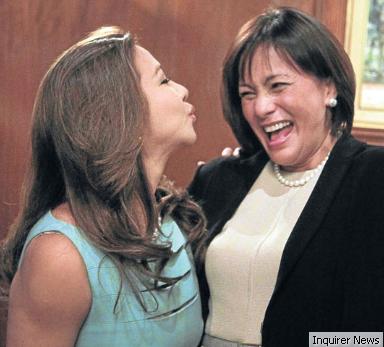 Inday Sara
The good news is Davao City Mayor Sara Duterte is taking a leave of absence while the DILG investigates Friday’s punching incident. The scary news is her father, Vice Mayor Rodrigo Duterte is taking over.

Asked if she regretted what happened last Friday, Davao City Mayor Sara Duterte explained she got incensed when violence erupted at the demolition. Ohhh, so she hated violence. What do you call then those three solid punches? Diplomacy?

Controversial Mayor Inday Sara Duterte has apologized for her outburst last Friday. Despite the apology however, a mass resignation has been announced by the Hyatt 10.

Davao City Mayor Sara Duterte says it’s okay if she gets disbarred for punching a court sheriff. What worries her more is the rumor that the Nevada State Athletic Commission is suspending her license to fight in Las Vegas.

Azkals Win
The Philippine Azkals clobbered the Sri Lanka Brave Reds in the FIFA World Cup qualifiers at Rizal Stadium Sunday. Watched by thousands of Filipinos, it was indeed a big win for… Studio 23!

President Aquino congratulated the Philippine Azkals for its 4-0 win against the Sri Lanka Brave Reds. The President believes the Azkals could have scored more goals if not for the heavy rains and the Arroyo administration.

Filipino-German right winger Stephan Markus Cabizares Schröck was given a yellow card after almost trading blows with a Sri Lankan footballer. Schröck was pacified by teammates who reminded him that he had no right to punch an opponent. He was advised to run for city mayor first.

No. 3: “Dear Imelda, You’re the epitome of beauty, grace, wit, and charm. You’re compassionate and have nothing but love for the less-fortunate. Idolo talaga kita. Happy birthday! Nagmamahal, Imelda”

And the No. 1 most surprising birthday text messages received by Imelda Marcos on her 82nd birthday…

Photo of the Weak
From the Facebook account of an entertainment talk show, this photo was posted by a viewer. We know the politician but who’s the girl?

“I had complete deprivation of my worldly and country assets. [After EDSA] we didn’t even know where to get our next meal.”
~Ilocos Norte Rep. Imelda Marcos who turned 82 last Saturday