No to Smoking
May 31 is World No Tobacco Day. To draw attention to the negative effects of smoking, the Department of Health will hold public forums on lung cancer, respiratory diseases, aging, and President Aquino’s lovelife.

No to Smoking II
Starting Monday, the MMDA will strictly implement Republic Act 9211, which prohibits smoking in public places. Violators will be fined 500 pesos on first offense. Public places include hospitals, government offices, schools, bus & jeepney terminals, loading and unloading bays, public playgrounds, plazas, and churches. Apparently, if you’re a heavy smoker, the only safe place for you is Malacañang.

No. 2: All the President’s Phlegm

And the No. 1 movie remake starring President Aquino and his cigarettes…

The Good, the Bald, and the Smelly 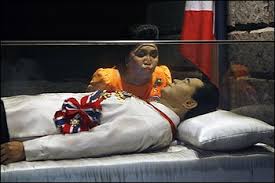 Marcos’ Burial
Vice President Jejomar Binay has finished conducting a survey on the issue of whether former president Ferdinand Marcos’ refrigerated body should be buried or not at the Libingan ng mga Bayani. The survey has a margin of error of plus or minus zero degrees Centigrade. 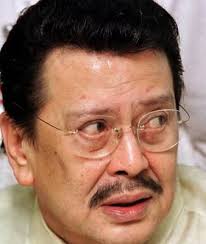 Erap in Manila
A tabloid report says former president Joseph Estrada is running for mayor of Manila in 2013. But critics say that’s not possible since Erap is a resident of San Juan. Estrada has clarified the report though saying he’s not running in Manila but in the ARMM!

ARMM Polls
Socialite and former Tarlac governor Margarita ‘Tingting’ Cojuangco said her nephew, President Aquino could not stop her from seeking the vice gubernatorial post in the ARMM. Just so you know, Tingting Cojuangco’s a feisty woman. Not even her husband Peping could stop her from getting those Botox injections.

New Rep
Ryan Luis Singson has been elected representative of Ilocos Sur’s first district replacing his jailed brother, Ronald. Unlike his Kuya, Ryan is said to be younger, gentler, and a lot more careful when in Hong Kong.

Grand Lotto
Nobody has won the 320 million-peso jackpot in the 6/55 Grand Lotto. The PCSO says bettors have a bigger chance of winning this time mainly because Inquirer reporter Miko Morelos has stopped placing bets.

Have a safe and fun week ahead!