Pacman Interpellates
World boxing champion and anti-RH Bill solon Manny Pacquiao slugged it out with veteran lawmaker Edcel Lagman in Congress last Wednesday night. It was a mismatch. The welterweight was exposed as a lightweight.

Did you see the Pacquiao-Lagman bout last Wednesday? Even if Pacman used steroids, he would have still lost that one.

Although the main event was lackluster, the undercard was thrilling and entertaining. Mommy Dionisia Pacquiao posted her first career win when Sen. Miriam Defensor-Santiago decided to throw in the towel.

Quoting God, Cong. Manny Pacquiao said everyone must “go out to the world and multiply.” His statement was seconded by the CBCP, anti-RH Bill groups, and Arnold Schwarzenegger.

Sperminator
Arnold Schwarzenegger admitted that he fathered a child with a member of his household staff. The kid is now a fourth grader at the International Cyborg Institute.

Former California governor Arnold Schwarzenegger fathered a child outside of his marriage. The other son was identified as Jose Victor or JV.

Arnold Schwarzenegger kept the child secret for 10 years. Maria Shriver discovered it with the help of US Navy SEALs.

Bilibid Or Not
Bureau of Corrections director Ernesto Diokno is in hot water these days. This, after ABS-CBN cameras caught convicted killer and former Batangas governor Antonio Leviste outside the New Bilibid Prisons, specifically, in Makati and Binondo – at least four times. Rumors say Diokno is on his way out. In fact, his post has been offered to Anthony Taberna.

According to records, former Batangas governor Antonio Leviste is a ‘living out’ inmate – meaning, he is free to move around the New Bilibid Prisons (NBP). The records didn’t explain though how Binondo and Makati City became part of the NBP.

Noy’s New Date
President Aquino invited a certain Bunny Calica to a date last Monday. Reports say Bunny is 27 years old, very simple, intelligent, and the type of person who wouldn’t say no to the elderly.

The Philippine Daily Inquirer reported that Bunny Calica had dinner with Baby James and Joshua Aquino at the Bahay Pangarap in Malacañang recently. The information came from the fourth member of President Aquino’s Communications Group, Kris Aquino. 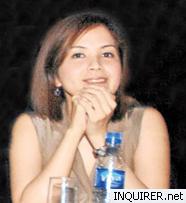 According to Kris, while having dinner, Baby James or Bimby asked Bunny, “Are you my tito’s girlfriend?” It was the President who answered, “No. But I hope so.” And then there was an awkward moment when Bimby said, “Hope? My daddy too.”

And the No. 1 thing Bunny Calica shouldn’t say if Baby James asked, “Are you my tito’s girlfriend?”

Quote of the Weak
“As you know I am still single. If I ever get a chance to go out on a date, it seems that I have invited the entire Filipino people to join me on that date. And I wonder who gave them the right.”
~ President Noynoy Aquino

112 thoughts on “OF DATES AND DEBATES”