Big Drop
According to the Social Weather Stations, the Aquino government’s net satisfaction rating plummeted to 46 percent in March from a record high 64 percent in the previous quarter. The President has ordered the AFP to start looking for a notorious terrorist to kill.

Osama, 54: A Postscript
President Obama has decided not to release gruesome photos of slain al-Qaeda leader Osama bin Laden. But because of pressure from skeptics, he has ordered Vice President Jejomar Binay to do a survey on the issue.

This photo shows top US government officials inside the White House Situation Room during the strike on Osama bin Laden’s compound. This is how a Situation Room looks like; not the one we saw last August 2010 at Emerald Garden Restaurant.

Unconfirmed reports say militant group Greenpeace is not at all happy with Osama bin Laden’s burial. The group cited a law against dumping human waste at sea.

US authorities have reason to believe that a defeated presidential candidate from the Philippines was present during Osama bin Laden’s burial. This, after US soldiers spotted a volunteer distributing bracelets.

Q: Via text, what did Osama bin Laden tell Abu Sayyaf Group spokesman Abu Sabaya?
A: Sea you there.

From Baker to Billionaire
Official records show Sarangani Rep. Manny Pacquiao is now the richest member of the House of Representatives. Another loss for the Villars.

Eight-division world champion Manny Pacquiao is the first billionaire member of Congress. And perhaps, the first and only multimillionaire solon who acquired his fortune through honest means.

Tearful Farewell
It was an emotional farewell for resigned Ombudsman Merceditas Gutierrez. Teary-eyed employees, colleagues, friends and everyone who loved her lined up to give her a hug. It got awkward though when retired Major General Carlos F. Garcia appeared and queued up too.

Resigned Ombudsman Merceditas Gutierrez announced her plan of putting up a website where ordinary people could report anomalous government transactions. Gutierrez made it clear though she’ll accept information only from unimpeachable sources.

And the No. 1 rejected domain name for outgoing Ombudsman Merceditas Gutierrez’s website… 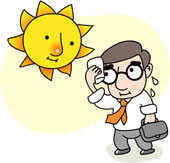 Hot!
On Wednesday, May 4, PAGASA recorded the year’s highest temperature . It was  a really hot day in Metro Manila. The only wet place yesterday was the Office of the Ombudsman.

The recorded temperature of 36.5 degrees Celsius on May 4th was the year’s highest so far. The weather was so hot… when Vicki Belo stepped outside, she melted.

And Wednesday’s weather was extremely hot, Sharon Cuneta stayed outside to burn some fat.

Wage Hike
Reports say the Employers Confederation of the Philippines is willing to give a P13.35 daily wage hike. Understandably, workers are up in arms. The amount can’t even buy Cornetto ice cream.

Charged!
Rosel Jakosalem Peñas, the female companion of actress Pilar Pilapil when she was attacked, has been charged with special complex crime of kidnapping with frustrated murder. Authorities have yet to arrest Peñas but Antipolo police are doing their best to locate her. In fact, they have started surveillance in Abbottabad.
——————————————————
“A man is not finished when he is defeated. He is finished when he quits.”
~Richard Nixon

Balls in Trouble
A popular college hoopster from an even more popular school is in hot water for an alleged sex-related offense. That probably explains his absence from an ongoing tournament. The issue has been a hot topic in online forums for a couple of months now. Different versions of the story have surfaced. Even officials and players from other universities are well aware of the “situation.” Terms such as “rape,” “sexual harassment,” and even, “consensual” have been used in the heated online discussions. Not so surprisingly, the school is mum on the matter. And even the country’s most outspoken and talkative sportscasters have chosen to zip their lips. May pinu-protektahan? May pinapanigan? Paging Gabriela!

76 thoughts on “HIGHS AND LOWS”