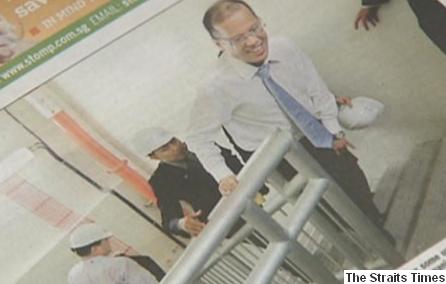 The Climb
After the elevator he took going down stalled underground, President Aquino, on Ash Wednesday had to climb the equivalent of 24 floors to reach the surface of a water facility plant in Singapore. When he reached the third floor, he fell on his knees but was able to recover, and continued walking. But members of his official party, and Singaporean officials got the shock of their lives when, upon reaching the sixth floor, he fell for the second time and then “Veronica” appeared and wiped his face.

During a visit to a water facility plant in Singapore, President Aquino and his party were trapped underground and had to climb 24 floors to the surface after the elevator broke down. The president of Singapore has instructed his defeated vice presidential running mate to visit the Philippines and apologize for what happened.

The elevator servicing a water facility plant in Singapore broke down forcing President Aquino to climb 24 stories… or as Filipino consumers would call it, “floor hike.”

President Aquino climbed the equivalent of 24 stories during a visit to a water facility plant in Singapore. When he reached the top, he placed a Philippine flag and scribbled a note on the floor: ” Noynoy was here.”

Reports say President Aquino “coughed along the way” while taking the underground stairs to the surface of a water facility plant in Singapore last week. When he reached the top, Singaporeans applauded him and then, to his surprise, asked: “Dahon or The One?” 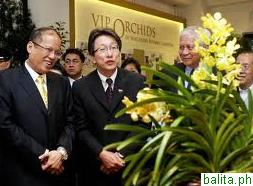 Singapore’s National Parks Board named an orchid after President Aquino… surprising the Philippine leader who actually expected the board to name a variety of tobacco after him. 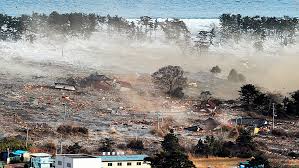 Japan Disaster
Nations around the world have been rushing to Japan’s aid after Friday’s devastating earthquake and tsunami. Britain is sending rescue units. China is sending search equipment. The Philippines is sending Joey Salceda.

The bad news: Japan is still trying to avert a meltdown at three earthquake-crippled nuclear reactors. The good news: it is easier to thwart than Charlie Sheen’s meltdown.

Japan is reeling from a disaster of historic proportions. In the Philippines, we have a term for that. Ombudsman.

“Battered”
Ombudsman Merceditas Gutierrez (OMG) claims she’s a “battered woman” being harassed by vindictive congressmen. If it’s any consolation, she’s the only ‘battered woman’ in this country who can call for a press conference anytime she wants.

Roxas and Taiwan
President Aquino’s troubleshooter, former senator Mar Roxas will reportedly meet again with Taiwanese officials in Taipei… or as Roxas himself would call it, “dieting.”

1906: The island of Ustica is devastated by an earthquake. Nations around the globe tried but failed to send help… because they didn’t know where Ustica was located.

1932: George Eastman, founder of the Kodak Company and inventor of the Kodak camera commits suicide. He and his girlfriend didn’t “click” so he “shot” himself.

1939: The Republic of Czechoslovakia is dissolved… mainly because nobody could spell its name correctly.

1943: Franklin Delano Roosevelt becomes the first U.S. president to fly in an airplane while in office. The airplane crashes because the office is way too heavy.

1947: Moscow announces that 890,532 German POWs are held in the U.S.S.R. German POWs were the first batch of jejemons in the world.

1947: Ambassador Paul V. McNutt and President Manuel A. Roxas sign the Military Bases Agreement at Malacañang Palace. The agreement grants 22 military, naval, and air bases in the Philippines to the United States. In return, the Americans vowed to help develop the country’s red light districts.

1968: After only two seasons on television, ABC aired the finalé of “Batman.” The last episode showed Batman and Robin living happily ever after.

Thanks to the National Historical Institute, Wikipedia, Any-Day-In-History, and Today in Science History.

Pampi and Jodi
Actress Jodi Sta.Maria and husband, Pampi Lacson (son of Sen. Panfilo Lacson) have reportedly called it quits. Their six-year-old son Thirdy laments, “I rarely see my dad.” To which, Pampi said, “So do I.”
————————————————–
“People are resilient. After all, every person born has recovered from nine months on life support.”
~Robert Brault,

Have a great week. Always bring a whistle with you. Ingat!