President Aquino was a no-show at the Presidential Communications Group-sponsored party. Secretary Ricky Carandang said the President was sent an invitation that apparently didn’t reach him. But Secretary Herminio Coloma believed the group actually forgot to send him one. Palace spokesman Atty. Edwin Lacierda explained, “At the end of the day, whether an invitation was sent or not, it’s still the thought that counts.”

Even without President Aquino, the Presidential Communications Group’s Christmas party pushed through. In fact, Asst. Sec. Mai Mislang had a blast during the event. Nagpa-raffle kasi ng pogi. 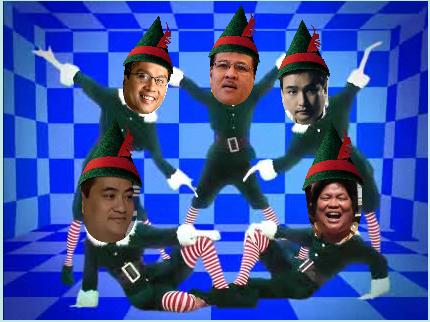 The Department of Interior and Local Government also sponsored a Christmas party. But there was this brief tense moment when a Christmas light bulb exploded and injured a guest from Hong Kong. Local Government Sec. Jesse Robredo couldn’t really explain how it happened saying it was Interior Undersecretary Rico E. Puno who was in-charge of the Christmas decors.

Undersecretary Rico E. Puno had the most number of guests during the DILG party. Asked who his visitors were a day later, he couldn’t remember anyone of them.

The Christmas party of the Commission on Human Rights started late, by at least an hour to be specific. CHR Commissioner Coco Quisumbing refused to start the program unless CHR employees followed her preferred seating arrangement.

The justices of the Supreme Court had so much fun during their own Christmas party. Divided into two groups, the justices performed two production numbers… which, as discovered by UP professors later, were copied from ‘ASAP’ and ‘Party Pilipinas.’

The Department of Tourism’s Christmas party was the most colorful of them all. Rumors say the DOT spent 5 million pesos! And that’s for the backdrop of the stage alone.

Ilocos Sur Rep. Ronald Singson spent his Christmas in Hong Kong because the judge hearing his drug case did not allow him to spend it here in the Philippines. Despite his sad fate, Singson remained in “high” spirits.

In Times Street, the Aquinos tried but failed to reenact the Nativity Scene… when Kris Aquino, who played the role of Mary, tried to divorce the man who played Joseph for psychological incapacity.

HAPPY HOLIDAYS!
—————————–
“There’s nothing sadder in this world than to awake Christmas morning and not be a child.”
~Erma Bombeck 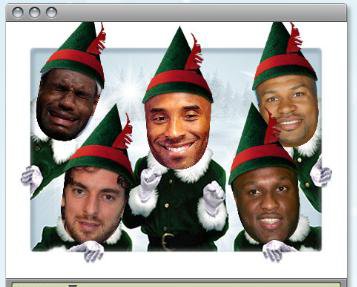 Enjoy the rest of your vacation!