ONCE AGAIN, it’s that time of the year when news and entertainment websites come up with a review of the events that transpired over the past 12 months. Some have already published their TOP 10 lists. TIME Magazine, for instance has the Top 10 of Everything of 2010 while PEOPLE magazine has its Best of 2010.

Beginning today, The Professional Heckler will be posting his own lists of the year’s bad, best, bald and Kris Aquino – plus, some year-end citations. Today’s post will be the first in a 3-part series. So sit back, relax, and enjoy… 2010: The Top 5 of Whatever!

ABS-CBN vs. Willie Revillame
– For the love of money is the root of all lawsuits.

TOP 5 “MAANG-MAANGAN” MOMENTS
Joseph Estrada’s “junking” of runningmate Jejomar Binay
– TV footage and photos prove it. Estrada did not vote for a vice presidential candidate last May 10. Sought for comment on the issue, Estrada initially admitted skipping the VP slot but “returned” and then corrected it. How in hell could he correct a ballot that had already been fed to the PCOS machine? “If you tell the truth you don’t have to remember anything.” – Mark Twain

President Aquino on Donald Tsang’s missed calls
– At the height of the Manila hostage crisis, Hong Kong Chief Executive Donald Tsang tried to reach President Aquino twice but to no avail. Later, the president was quoted to have said: “Hindi ako kinatok sa meeting.” Tell that to the angry Chinese!

Secretary Ricky Carandang on Mai Mislang’s tweets
“We warned her to be more careful with her tweets,” thus said Presidential Communications Development and Strategic Planning Office Secretary Ricky Carandang on Mai Mislang. For chrisssakes, Ricky, you were tweeting her! You were the one who asked about the taste of the wine in Vietnam. Did you advise her to be more circumspect during that very public Twitter exchange? No. As the poet Juvenal in Satire VI asked, “Who will guard the guardian themselves?”

TOP 5 “TUMABI KAYO, NAGWAWALA ANG LOLA/LOLO N’YO” MOMENTS (a.k.a. Outbursts of the Year)
CHR Commissioner Coco Quisumbing
– Reporters covering the Commission on Human Rights were shocked when CHR Commissioner Coco Quisumbing suddenly went ballistic. Ang dahilan: ang arrangement ng pagkakaupo ng mga mamamahayag. Channeling her inner GMA, Quisumbing told the journalists:
“If you’re not in my line of sight, I am not going to talk to you. If you’re not going to listen to me and position yourselves as I am asking you to, I am just gonna walk out the door. Do you all hear me? (Yes, ma’am!) Ano?!? (Yes, ma’am!) I don’t hear all of you! (Yes, ma’am!) Ikaw, naka-green shirt, hindi kita kilala, I’m not going to take any of your questions. The lady with the white undershirt, what’s your name? You should be nicer to the person you want to interview. Be polite and you answer ok?”
Quisumbing’s outburst reminded me of a bumper sticker that read, “It’s called PMS because mad cow disease is already taken.” For her misplaced ego, Coco loco will also receive a special citation: “Bitchin’ for No Reason Syndrome Award.” Congratulations!

Teresita Ang See
– In the IIRC hearings, Ang See castigated RMN news anchors Erwin Tulfo and Michael Rogas for obstructing and interfering with the negotiations during the Manila hostage crisis. Already irritated by the RMN anchors’ reasoning, Ang See even got more annoyed because of Tulfo’s fake American accent. 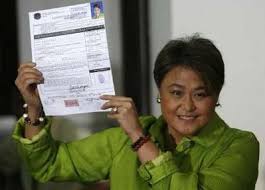 TOP 5 “DID S/HE REALLY SAY THAT?!” STATEMENTS
“How much is galunggong? I don’t know. I’m a vegetarian.”
– Ex-senator Jamby Madrigal’s defense when attendees in a UP presidential forum heckled her after she failed to give the accurate price of galunggong. Again, that’s vegetarian, not vagitarian. Two different things.

“Well, well, I am sure that after your marriage, you had some insertions.”
– Sen. Aquilino Pimentel to Sen. Mar Roxas during Senate’s heated debate on the alleged C5 road project budget insertions of Senator Villar. Mr. Palengke was offended by the quip and sought an apology from the veteran politician. Moral of the story: When in Senate, do not crack jokes about cracks.

“I am going to be a blessing to others.”
– Hayden Kho Jr. after the Pasig City RTC dismissed the sex video scandal case filed against him by actress Katrina Halili || ‘Blessing to others’ ba ‘ka mo?! Blessing mo’ng bay*g mo!