LAST MONDAY, the Department of Tourism announced a change in slogan: from “Wow Philippines” to “Pilipinas Kay Ganda.” It was the DOT’s biggest accomplishment yet since June.

DOT Secretary Alberto Lim clarified that the new slogan that was previewed Monday was not final yet. Or as palace spokesman Edwin Lacierda would say, “it’s being fine-tuned.”

Tourism Secretary Alberto Lim revealed that the ‘Pilipinas Kay Ganda’ brand was a result of a four-month study. In fairness, hindi halata.

This just in! A blogger pointed out some similarities between the logo of “Pilipinas Kay Ganda” and the logo of Poland’s official travel website. Sought for comment, an unidentified DOT official said, “As long as there’s no malice, it’s okay.”

The latest online buzz is that the logo of the “Pilipinas Kay Ganda” campaign of the Department of Tourism was “copied” from the logo of Poland’s official travel website… making DOT Secretary Alberto Lim a possible frontrunner for Associate Justice of the Supreme Court.

As mentioned above, Tourism Secretary Alberto Lim revealed that the ‘Pilipinas Kay Ganda’ brand was a result of a four-month long study… which was understandable since the study was conducted naman pala in Poland.

And the No. 1 suggested but rejected (read: lamest) slogan for the government’s tourism campaign (assume that President Aquino and his sister Kris are the tourism envoys)…

From Japan With Love
Presidente Aquino is back from Yokohama. The successful trip was highlighted by the $2.85 billion worth of potential investments from Japan; a “fruitful” meeting with Hong Kong executive Donald Tsang, and his confirmation of a budding romance with Liz Uy.

According to an informant of entertainment editor Ricky Lo, President Aquino has had 18 girlfriends. Or as pessimists would say, 18 failed relationships.

Last Monday, some 5,000 passengers in Metro Manila got stranded when bus operators went on a strike in apparent protest of the number coding scheme. That’s the latest problem – involving buses – that has hounded the Aquino presidency.

Claire de la Fuente claims the number coding scheme on buses is unjust, as it would drastically reduce the income of bus operators by about 20 percent. But if you’re not paying your taxes honestly, why worry? 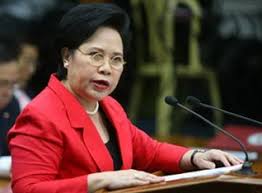 Miriam on Cabinet Men
Senator Miriam Defensor-Santiago says President Aquino has a “lightweight cabinet” and vowed to block the confirmation of at least six cabinet members. The feisty lawmaker added, “I will massacre these people.” In totally unrelated news, sources reveal that when Senator Santiago fell off the stage at a forum in Istanbul, Turkey recently, “una ang ulo.”

Wyngard, 58
Veteran talent manager Wyngard Tracy died before dawn last Tuesday. Wyngard was the manager of Richard Gomez, Lucy Torres, Wendell Ramos, and John Estrada who used to be managed by Douglas Quijano who passed away last year. They are now looking for a new manager. Anyone?
——————————–
“More is required of public officials than slogans and handshakes and press releases. More is required. We must hold ourselves strictly accountable. We must provide the people with a vision of the future.”
~Barbara Jordan