Makati Gas Leak
Independent experts from UP discovered that the petroleum pipeline operated by the Lopez-owned First Philippine Industrial Corp. (FPIC) was the REAL source of the gas leak at the West Tower Condominium in Brgy. Bangkal, Makati City. When the leak was first discovered, Makati City Mayor Junjun Binay was quick to absolve FPIC of any wrongdoing. The reports didn’t say though if FPIC officials were Binay’s fraternity brothers.

Briefly Noted
Three months ago, this was the headline:

To Energy Secretary Jose Rene Almendras:
“Always keep your words soft and sweet, just in case you have to eat them.”

Hostage Incident
A hostage incident took place in Brgy. Bangkal, Makati City Thursday afternoon. The crisis was swiftly resolved mainly because the police were able to control the media.

Travel Warnings & Security
Six countries have advised their nationals against traveling to the Philippines… specifically to Brgy. Bangkal, Makati City.

First the United States. Then, Australia, New Zealand, Canada, and Great Britain. And now, France. What have we done to you? Did we say that your wine sucked? Did we say that men in your country didn’t look good? Did we say that crossing your streets was the easiest way to die? How dare you!? How could you treat us like this when you’re not even Vietnam?!?

On Thursday, an irked President Aquino said reports of imminent terror threats in the Philippines have “no adequate basis” and “were blown out of proportion.” A day later, he confirmed “the assassination plots on several of our security officials and two ambassadors.” Ano ba talaga?

Amid reports of terror threats in Metro Manila, the Light Rail Transit is now on Alert Level 3. Meanwhile, President Aquino is on Red Alert Level 10. 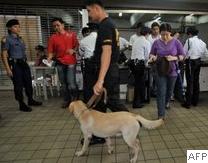 Due to stricter baggage inspection, there have been long queues at LRT and MRT stations. But queues outside lotto outlets are still longer.

Mall owners are reportedly concerned over reports of imminent terror threats in the metro. To give you an idea of how concerned they have been, this morning, the Gokongweis evacuated the “snake” out of Robinsons Galleria.

Following reports of terror threats, security has been beefed up around the metro. And people from all walks of life are taking it seriously. For instance, in Makati Avenue, prostitutes are now asking for at least two IDs from customers.

Intelligence reports say Islamic terrorists are targeting San Juan City. According to San Juan Rep. JV Ejercito “extra-precautions are now being implemented” in the area. The police have been supplied high-powered rifles, the residents have been told to be vigilant, and his mom, former actress Guia Gomez, now city mayor has been advised to act like one.

This just in: Malacanang has issued a travel advisory ahead of next week’s APEC Summit in Japan. The advisory bars Asst. Sec. Mai Mislang from taking the trip with the President.

Robredo Out Soon?
Earlier reports say President Aquino is removing Secretary Jesse Robredo from the Department of Interior and Local Government and appointing him as head of an agency tasked to oversee informal settlers – something that was so appropriate since Robredo has always been treated by the president as an informal settler at the DILG.

Less than 24 hours after being quoted as such, President Aquino denied that Secretary Robredo was on the way out… apparently because his “relocation site” has yet to be established.

Lozada Out of Nuns’ Care
NBN-ZTE deal whistleblower Rodolfo “Jun” Lozada Jr. is reportedly leaving the care of a group of nuns. Soon, Lozada will no longer be an informal settler. 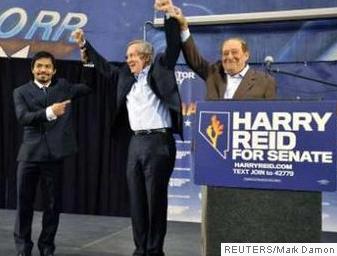 Pacquiao’s Endorsement
US Senate Majority Leader Harry Reid whom Manny Pacquiao endorsed emerged victorious in the recently concluded US midterm elections. Observers say Pacquiao’s endorsement was a huge factor in Reid’s win although it also helped that the senator didn’t attempt to discredit his opponent by releasing manufactured psychiatric reports.

La Greta’s Undies
Interviewed on ANC, actress Gretchen Barretto explained that she would never ever wear cheap panties because she was “always ready.” She didn’t say though if she’s ready to explain why her lips are the only part of her face that move.
———————————————-
“I went to the airport to check in and they asked what I did because I looked like a terrorist. I said I was a comedian. They said, “Say something funny then.” I told them I had just graduated from flying school.”
~Ahmed Ahmed

Barranda Out, Fullido In
From a very reliable source: Model Phoemela Barranda who hosts the showbiz segment ‘Star Patrol’ on TV Patrol will be replaced by Gretchen Fullido starting Monday, November 8. Ouch!

Personal
Kobe, Coach Phil, and the Los Angeles Lakers are on a 5-game winning streak. Is it June 2011 yet?