Senator Francis Pangilinan says embattled Asst. Sec. Mai Mislang made a mistake, has apologized, and was reprimanded. That, for him was enough. Mistake. Apology. Reprimand. End of story. It obviously worked for him and Shawie. Hopefully, it works for everybody.

Saying Asst. Secretary Mai Mislang’s apology was enough, Senator Francis Pangilinan said the public should focus on the serious problems of the country. Okay, sure. Let’s start with the Presidential Communications Group.

And the No. 1 rejected suggestion for Asst. Secretary Mai Mislang’s new email address…

Most Wanted Man
The country’s most wanted man, kidnap suspect Rolando Fajardo was arrested after 10 years in hiding. With Fajardo’s arrest, the No. 1 position is now occupied by Senator Panfilo Lacson.

One of the country’s most wanted men, Rolando Fajardo believes he will get a fair and just trial under the new administration of President Aquino. If lucky, he could even get an amnesty.

SWS Survey
The good news is: 7 out of 10 are satisfied with Vice President Jojo Binay. The bad news is: Mrs. Binay is not of one of them. 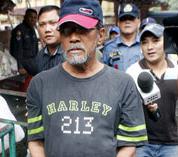 From RP to PH
The Department of Foreign Affairs announced recently that the government has shifted from using RP as official acronym of the Philippines to PH (or PHL). But DFA officials categorically denied rumors that the country’s official motto will likewise be changed from the original “Maka-Diyos, Maka-Tao, Makakalikasan at Makabansa” to simply… “PH Cares.”

Kris’ Dream
President Aquino’s youngest sister, Kris revealed Tuesday, “I dreamt of mom. It was as if she was moving in my house. Parang nagpaparamdam si mom na parang everything is at peace na.” Yeah, it was. Until that dream.

“Imagine” Manny & Will
Manny Pacquiao guested again on the late-night talk show show Jimmy Kimmel Live where he performed a duet with comedian Will Ferrell. Pacman and Will sang the John Lennon classic “Imagine.” Watching the show online in Malacanang, an unidentified official murmured, “the duet sucks.”

A former vice president, a former congressman, and a former senator’s wife will anchor TV Patrol starting next week. This early, Forbes Magazine is keen on naming TV Patrol Asia’s most powerful and influential news program.

Korina Sanchez will be back on TV Patrol starting Monday, November 8. While politicians cannot return to government service within a period of one year, ABS-CBN bosses are reinstating Korina because the constitution allows the return of the wives of defeated candidates after a brief period of… embarrassment.
———————————–
“It’s so simple to be wise. Just think of something stupid to say and then don’t say it.”
– Sam Levenson