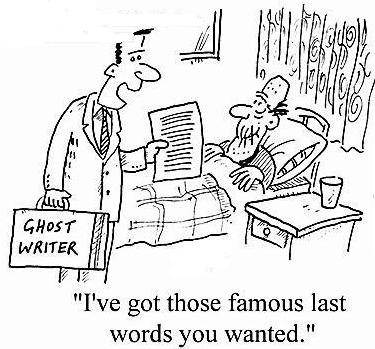 MOMENTS BEFORE he died, famous French grammarian Dominique Bouhours uttered: “I am about to – or I am going to – die: either expression is correct.” On his deathbed, Voltaire was asked by a priest to renounce Satan. The philosopher replied: “This is no time for making enemies.” And convicted murderer James French shouted this to members of the press who were to witness his execution by electric chair: “Hey, fellas! How about this for a headline for tomorrow’s paper? ‘French Fries’!”

In advance observance of All Saints Day, The Professional Heckler brings back ‘Famous Last Words’ – “predicted” deathbed statements of local political and entertainment figures. This is the 2010 edition of that ‘recurring’ blog article.

Interior Undersecretary Rico Puno: “Unless the President asks me to die, I won’t.”

Atty. Edwin Lacierda: “I have no idea who leaked the information on my purported death but I assure you – the Communications Group had nothing to do with it. I promise to investigate the matter when I’ve fully recovered.”

Comelec Commissioner Gregorio Larrazabal: “Honestly. Orderly. Peacefully.” [When asked by the press how he wanted to die]

Antonio “Tony Boy” Cojuangco (to the press): “Who told you I am dying? I am not. Walang concrete evidence ‘yang source n’yo. You! Yes, you the reporter in blue, tell me, kung wala bang matibay na ebidensya ang source ng balita mo, irereport mo?”

Outgoing ABS-CBN News & Current Affairs Chief, and Esquire magazine’s Sexiest Filipina Alive Maria Ressa: “I will not be renewing my contract with ‘life.’ It’s time for me to move on.”

And finally…
Kris Aquino (via Twitter): “RT @iamkrisaquino: guys, thanks for all your prayers. joshua and bimby are beside me now. i told them to be strong. grabe! bimby cried when i told him na i’ll gonna visit him every nite. hahaha then josh said, ‘mamu, you’re creepy.’ gosh, ganito pala ang feeling. kaloka!” #AlmostDead #KeriLang #Now Na!

In the news now:

More than 300 officers and enlisted men who took part in three failed power grabs were granted amnesty by President Aquino. When he heard the news, Sen. Panfilo Lacson started plotting a mutiny against the Aquino government.

The RH Bill Debate
The good news is: Cebu Archbishop Ricardo Cardinal Vidal has reportedly asked President Aquino to create a panel that will discuss the pros and cons of the Reproductive Health Bill. The bad news is: the panel’s recommendations will have to be reviewed by Executive Secretary Paquito Ochoa.

GMA News.TV reported that the Church is eyeing Facebook as another platform against the Reproductive Health Bill. If that happens, that page will likely set the record for the most number of clicks to the “Unlike” button. 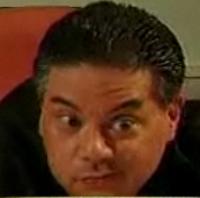 Confused Congressman
Interviewed on GMA 7’s Reporter’s Notebook, Negros Occidental Rep. Jules Ledesma was asked if he’s gay. Ledesma answered, “I don’t know. Maybe! Maybe not.” Watching her partner on TV, Assunta da Rossi was like, “My God, did you just make me a lesbian?” 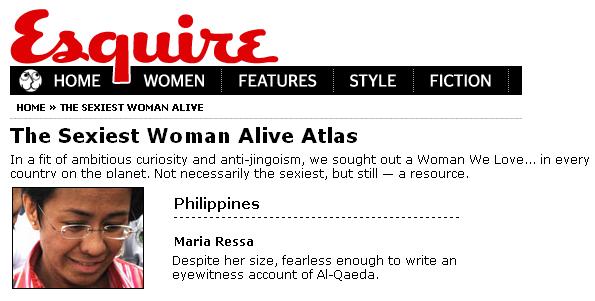 Outgoing ABS-CBN News and Current Affairs chief Maria Ressa has been named by Esquire magazine as the Sexiest Woman Alive for Philippines. Rumors say Ressa’s enemies in ABS-CBN will file a complaint against Esquire for baseless and biased reporting. 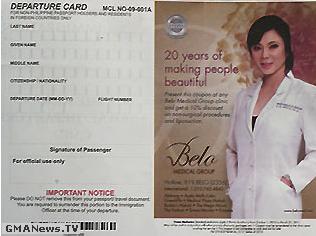 Belo on Immigration Cards
Reports say the face of cosmetic expert Vicki Belo replaced the image of President Aquino on immigration cards. Apparently, it was an advertisement for the Belo medical clinic. But critics wanted the cards recalled saying tourists might confuse the Philippines for Madame Tussauds.

Just weeks after incurring the ire of President Aquino, the Bureau of Immigration stirred yet another controversy by printing millions of the modified arrival and departure cards, this time with the face of cosmetic expert Vicky Belo. Immigration officials defended their action saying they actually chose between two advertisers: Vicki Belo and Ellen Lising. Sige, mamili kayo!
————————–
“I want to die like my father, peacefully in his sleep, not screaming and terrified, like his passengers.”
~Bob Monkhouse