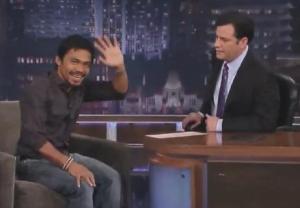 Pacquiao on US Talk Show
Earlier this week, boxing champion Manny Pacquiao guested on US talk show “Jimmy Kimmel Live.” Asked by Kimmel if he was the most popular guy in all of the Philippines, a grinning Pacquiao answered, “I am. You know… until Cory Aquino died.”

Pacquiao on US Talk Show II
Manny Pacquiao was the special guest this week on “Jimmy Kimmel Live.” Asked by Kimmel if he was the most popular guy in all of the Philippines, a grinning Pacquiao answered, “Since September, I am only third. First is Noynoy Aquino, and second is Nathaniel ‘Mang Tanny’ Cruz.” 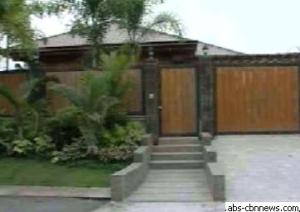 GMA’s New House?
Malacañang refused to comment on reports that President Arroyo is the owner of a newly-constructed 400-square-meter single-story house in Lubao, Pampanga. But Pampanga Rep. Mikey Arroyo said the media should stop speculating because the house was just a gift from his parents’ wedding sponsors.

ABS-CBN’s Corp Com Head
In a phone interview, ABS-CBN Corporate Communications head Bong Osorio dismissed speculations that ABS-CBN was favoring presidential aspirant Noynoy Aquino. Nope, Osorio is not insulting our intelligence. He is assuming that we don’t have any.

SWS Survey
The latest Social Weather Stations survey showed that 53 percent of Filipino families consider themselves poor. The response of the remaining 47 percent was invalidated because they answered “Noynoy Aquino.”

Freedom Survey
A recent study conducted by the London-based Legatum Institute in tandem with Gallup World Poll showed that 85 percent of Filipinos expressed satisfaction with the freedoms afforded to them in their daily lives. Sen. Chiz Escudero was not among the 85 percent because the study was conducted months before he resigned from NPC.

Freedom Survey 2
According to a study conducted by the London-based Legatum Institute in partnership with Gallup World Poll, “Filipinos enjoy excellent freedom of movement, religion, and speech” – the same freedoms enjoyed most by Loren Legarda, Mike Velarde, and Chiz Escudero, respectively.

The Mayor and the Heist
Reports say two of the members of the gang that robbed a Rolex store in Greenbelt 5 last month worked for San Nicolas, Pangasinan Mayor Leoncio Saldivar III. But Saldivar denied any involvement in the Greenbelt 5 incident mainly because he expected the group to rob Glorietta 4 instead.

Plastic Surgery
Alvin Flores, the leader of a robbery gang eponymously named after him, reportedly had his face changed through plastic surgery to evade police detection… something that was totally unnecessary if he were a congressman.
__________
“A speculator is a man who observes the future, and acts before it occurs.”
~Bernard M. Baruch