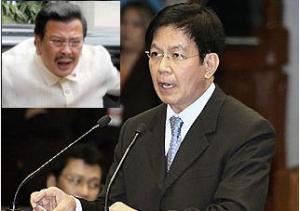 Sen. Panfilo Lacson delivered an explosive speech linking former president Joseph Estrada to illegal gambling operations, big time smuggling, extortion, and other abuses during his presidency including his possible involvement in the gruesome murder of PR man Bubby Dacer. Observers believe this could have been the year’s most shocking political story… had not Sen. Mar Roxas proposed to Korina live on Wowowee. 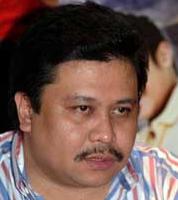 In Part 1 of his three-part exposé on former president Joseph Estrada titled “Ang Dalawang Mukha ng Sining,” Sen. Panfilo Lacson detailed his former boss’ involvement in illegal gambling, smuggling, extortion, and other abuses during his short-lived presidency. After listening to Lacson’s speech, every single person in the Estrada household was reportedly stunned. In fact, former senator Loi Ejercito was so shocked… for the first time in several years, her face moved!

And the No. 1 rejected working title for Senator Panfilo Lacson’s upcoming privilege speech against the Estrada family…

SWS Survey II
The latest SWS survey showed that the Noynoy Aquino-Mar Roxas tandem was the most preferred by voters in Luzon. The least preferred was the Mar Roxas-Korina Sanchez tandem.

GMA’s US Trip
President Arroyo has canceled her scheduled trip to New York. The president made the decision after getting information that not a single solon was willing to foot the bill at Le Cirque this time.

Elsewhere: RG Cruz vs. Korina Sanchez
I received a letter three days ago but opted to verify its authenticity first before writing about it lest I be accused again of spreading black propaganda against a certain Korina Sanchez.

Just so you know, there’s an ongoing “war” between a certain Korina Sanchez and RG Cruz, a journalist from ABS-CBN.

Reports say a certain Korina Sanchez, through an open letter, has asked her superiors at ABS-CBN to probe RG for his not so flattering Facebook comments about the ex-future First Lady. [Pati ba naman Facebook status, patulan?!]

A portion of the ex-future First Lady’s letter to management menacingly reads:
“So to you, RG Cruz, I say, I hope that — as your Facebook entry narrated — as you were “eating chocolate” and indulging your gastronomical cravings while events at Club Filipino on the 2nd of September 2009 were unfolding and all you could think of and delight in, as written in your Facebook, are your cruel attacks, pettiness, inanities and insensitivities to the sacrifice of others and, horror of horrors, make these public — you will, henceforth, attempt to save yourself from the very real prospect of disappearing, leaving this world without a trace, no better and even worse than when you found it.”

Here’s the letter in full as posted in the blog of lawyer Marichu Lambino.

Da Who?
Very reliable sources say a lawmaker who has “links” to showbiz is hooked on prohibited drugs. Because of the addiction, he is frequently absent in sessions. A TV show is currently working on the story but I seriously doubt if the lawmaker would grant an interview… unless he’s prepared to lose in the 2010 polls. Hint: Check out your calendar.