Tita Cory: A Postscript
Former presidents Fidel Ramos and Joseph Estrada as well as Vice President Noli De Castro, members of both Houses of Congress and government officials attended the requiem mass for former President Corazon Aquino at the Manila Cathedral. There was a heavy downpour in Manila that morning. No wonder, President Arroyo was so isolated.

And the No. 1 thing overheard at the wake of Tita Cory when President Arroyo arrived….

A resolution to declare President Cory Aquino a “national hero” has been filed in Congress. Malacañang is reportedly supporting the resolution… but aside from Cory, President Arroyo is requesting Congress to also declare as national heroes Carlo J. Caparas and Cecile Guidote-Alvarez.

A resolution to declare President Cory Aquino a “national hero” has been filed in Congress. Another resolution will also be filed to officially declare Kris Aquino our “national pastime.”

Kris Aquino revealed that her eldest son Josh told his Tito Noynoy “to please never get married.” Newspaper articles were right. The torch has been passed… Noynoy shall continue the suffering.

There were conflicting reports as to the crowd estimate during the Cory Aquino funeral. According to ABS-CBN News Online, there were 250,000 people. Congressman Rodolfo Plaza believes the number reached 500,000. The Philippine Daily Inquirer reported 150,000. Bro. Eddie Villanueva says 5 million.

Cory’s sister-in-law, former senator Tessie Aquino-Oreta was supposed to take part in the necrological services last Tuesday. Organizers had to decline though because she offered to do a dance number. 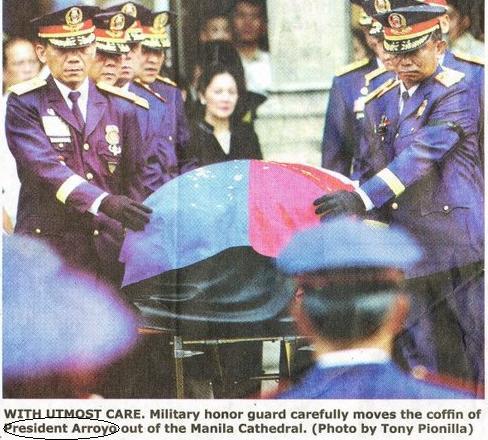 Briefly Noted Under the Arroyo administration, several journalists were killed. The last five days, it was the journalists’ turn to “kill” Mrs. Arroyo.

Elsewhere…
Who is more powerful than Gabby Lopez and Charo Santos-Concio? Who else but Willie Revillame! Check out this video.

Alyansa ng Filipinong Mamamahayag on Willie Revillame: “For him to demand the removal of the little window screen showing the funeral march of the woman who got ABS-CBN back from Marcos is a blasphemy of democracy, an act despicable as him fucking his own mother.” Here’s the full statement.

There’s an online petition against Willie Revillame. Check it out here.

Newsbreak Online has a piece on local media’s inaccurate reporting.

Survey Says…
Is it possible to have another Cory Aquino in the Philippines?
YES, I still believe in Filipinos: 59%
NO, I’ve lost hope: 30%
Not Sure: 11%

56 thoughts on “THE LAST FIVE DAYS”