House Speaker Jose De Venecia claims his son Joey is “an agent of the Lord, an agent of change, and an agent of some form of moral regeneration.” Wait, was it Joey or is it JDV who’s hooked on drugs?

House Speaker Jose De Venecia claims his son Joey is “an agent of the Lord, an agent of change, and of some form of moral regeneration.” Watch out Brother Mike. You’ve got competition!

Columnist Jarius Bondoc, who accused Comelec Chairman Benjamin Abalos of threatening to kill him thought that Abalos was the most menacing person he’s seen recently. Until Luli Arroyo began talking.

Joey De Venecia and Britney Spears have two things in common. Both have checked into rehab and both are “bald.” Here’s the proof. 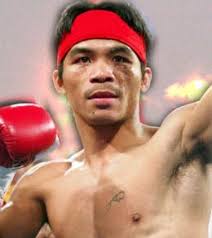 Pacquiao and the National Anthem

In a press conference held to promote his concert, actor Piolo Pascual admitted that he had an affair with singer Pops Fernandez some years back. However, that didn’t really surprise the members of the press. They’ve heard similar revelations from the likes of Arnell Ignacio, Ogie Diaz, and yes, even the late hairdresser June Encarnacion.

The French mime artist Marcel Marceau has died at the age of 83. The cause of death was not revealed by his family but the public is 100 percent sure that he died – silently.